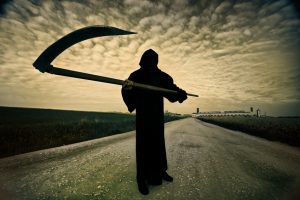 Grim Reaper on the road

I can’t remember how old I was when I realised that I would die one day. Of course I knew that I would die – everybody dies. But that day the realisation became somewhat visceral. I was really going to die!

My first reaction was, “How do I get out of this?” Followed swiftly by the sickening realisation that I wouldn’t.

But I was young and there were other things to occupy me; swiftly I moved on with only occasional thoughts of mortality.

The years passed and the thoughts became less occasional. And, strangely, less worrying.

Now, given my advanced years, I am probably closer to death than most people who will read this. So, especially if you have just reached the “how do I get out of it?” stage, what can I say that might be useful, comforting (or help you have more fun and freedom?)

Only this. Some day you will exist as a memory for your family, your friends. Make sure they remember you fondly; as someone who brightened their lives; who was a good friend, sibling, parent, lover.

Don’t waste the time you have. Instead follow your heart, spread a little love and make sure you can always face yourself in the mirror.
Until next time, mortal