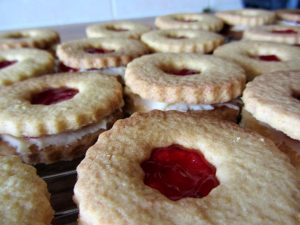 Once upon a time (all the best stories begin this way, and so does this one) there was a man who decided to go on a diet. Me.
I realised I was carrying a bit too much flab and decided to take decisive action! And for a while it went really well; I was proud of my steely determination as I stuck to my eating plan and watched the pounds ounces fall away.

There was just one minor cloud on my horizon – the biscuit barrel on the kitchen work surface. I passed each morning on my way to reaper my healthy breakfast. At first it was no problem – in fact it suited my smug attitude to this diet thing; in a way it validated my high opinion of my willpower and determination.

But then something strange began to happen. The biscuit barrel seemed to get bigger. It even moved across the worktop, getting closer to me each day.

Eventually I lifted the lid and peeked in. Nothing there to bother me; a few ginger nuts; jammmie dodgers, digestives.

A couple of days later I peeked in again. Just one biscuit couldn’t do any harm surely? I chose the least seductive, a digestive. I took a small bite. Then a bigger one. I crammed the thing in and reached for another, a ginger nut this time. Then the ultimate sin – a jammie dodger!

Oh no! I’ve blown it! I am a worthless excuse for a human being. Can’t even stick to a diet for a few days. Just like everything else I try, I fail at the first hurdle. Oh, well, I might as well eat the whole damn lot.

Which, of course, is a common human reaction. One slip and we give up. We berate ourselves and swear never to try to achieve anything ever again; there’s no point, failure is in our genes.

It’s all nonsense. An overreaction in the heat of the moment. But every time we succumb to it, it makes it all the more inevitable we’ll react the same way next time we encounter a setback.

Because setbacks, trips, stumbles are an inevitability when the goal is worthwhile. Nothing significant is easy to achieve. But nothing will be achieved by quitting at the first, the second, or the twenty-second stumbling block.

Slipping up, falling below the standards we set ourselves are not in themselves failure. Giving up when things get tricky is failure.

When you stumble, when you hit a roadblock, acknowledge it and carry on. The only thing between you and your goals is time. Time to make progress, time to detour round the roadblocks, time to pick yourself up when you trip. And time to reflect, regroup and reconfirm your determination. Time to carry on.
Keep going, you can make it!